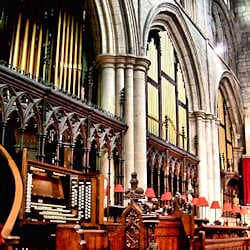 This is one of the most heroic organs with which I have been involved — playing it never fails to thrill me. The original 1889 Anneessens pipework still exists within a new 2005 organ by Nicholson & Co.

The renowned 1889 Annesseens organ at Bridlington, on Yorkshire’s east coast, had been rebuild over the years several times. Abbott & Smith had the first go in 1909, followed in 1922 by Norman & Beard, then in 1949 John Compton electrified it, added many new chests for additional ranks, and supplied a new (attached) console. In 1968 Laycock & Bannister fitted a new Kimber-Allen console (detached, and still there) and altered the tonal scheme according to the tastes of the time. Laycock & Bannister had just been bought up by Dennis Thurlow and Raymond Todd, so it was Thurlow who did the voicing — and married the Priory organist’s daughter! He did more work there in 1976 with his other company — Nicholson & Co — who took over the maintenance and undertook further soundboard restorative work in the early 1990s. This left it with a 4-manual scheme, 79 speaking stops, and the largest-scale 32ft reed in the country — Anneessens’ original Contra Tuba, whose stentorian tones completely dominated the ensemble.

I was invited in early 2000 to write a comprehensive Report & Recommendations, because the organ was still giving soundboard trouble and was felt musically to be something of a “dog’s breakfast” with contrasting elements failing to blend. This I did, coming to the expensive conclusion that the only way forward after a century of alterations and additions was essentially to start again, using the old pipework as the basis of a structurally new instrument, arranged so as to speak far better into the nave and to be fully accessible for maintenance. It took some time for the very considerable sums to be raised, which they were mainly through the vision and genial determination of the Rector, the Revd John Wardle, himself a fine organist and pianist.

The organ was built by Nicholson & Co during 2004-5 and was the largest instrument the firm had made, before Llandaff Cathedral and Auckland Cathedral came along. It has 4 manuals and 75 speaking stops. The layout divides the Great into two — the Anneessens Great speaking across the chancel, as does the Positive, the [primary] Great speaking down the nave from behind the striking Laycock & Bannister 16ft case front. The Swell speaks south and west and the gigantic 32ft reed was repositioned at the east end of the organ, where it thunders mightily away but no longer overwhelms the tutti. The tonal scheme was thought right through, and I gave particular care in devising an integrated scheme for the organ’s six chorus mixtures — 21 ranks in all. The new soundboards and wind system allow the Anneessens pipework to sound better than it ever has done, and later additions all now tie in splendidly, including fine Compton strings and Tuba on the Solo, and the beautifully-voiced mainly Nicholson Positive. Along with the sizzling Anneessens Swell chorus reeds, the Great and Pedal are definitely this organ’s glory, at 21 and 17 stops respectively.