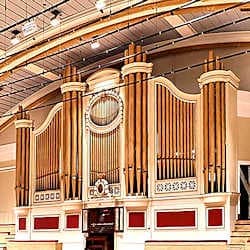 After many years in the doldrums, this superb 1913 concert organ by Stephen Taylor & Co was immaculately restored by Richard Young during 1996/7. It packs a punch!

Before being accepted as a member of the Association of Independent Organ Advisers, an applicant has to submit the full paper trail for two successful organ projects, which are scrutinized and looked into. If the work has been of sufficient calibre and has left a nicely-finished and reliable organ and a happy client, then the aspiring organ consultant stands a good chance of becoming Accredited by the AIOA. My work at the De Montfort Hall in Leicester was one of the projects that led to my accreditation; the other was overseeing the 2002 Nicholson restoration of the fine 1984 Abbott & Smith organ in the Catholic church of Our Lady and the English Martyrs in Cambridge.

My work at the De Montfort Hall began in the early 1990s when I was invited to inspect the 1913 magnum opus of Stephen Taylor & Son, the highly-regarded Leicester firm. This organ sounds far larger and more ‘imperial’ than its 45 stops would suggest, due in no small measure to the fact that not only are all the chorus reeds on heavy wind pressure, but they were voiced by W. C. Jones, the voicer who had created the ‘Harrison sound’ in the previous decade. His skill and fastidiousness were the stuff of legend, and the quality of the finished reeds has never been surpassed. To hear the Great 16.8.4 Trombas, the Swell 16.8.4. Trumpets and the Pedal 32.16.8 Trombones drawn together is an awe-inspiring experience. The beauty of the soft stops matches the quality of these heroic reeds and for concert purposes the tonal scheme is ideal, the third manual being a Solo, with delicious flutes, strings and orchestral reeds, the latter also voiced by Jones.

Taylor’s clever tubular-pneumatic action, his neat console with its tiny stop-knobs, and his fine soundboards had all been desiccated by the hall’s heating, so my task was to recommend and supervise an historic restoration. There was really only one appropriate firm — that founded by former Taylor craftsman Roy Young, and handed over to his son Richard at much the same time that this great project came along. Their scrupulous work was complete by the autumn of 1997 and recitals resumed, to an enthusiastic reception. Would that a City Organist had been appointed at the same time, to promote and care for the instrument, but, alas, that was not to be.