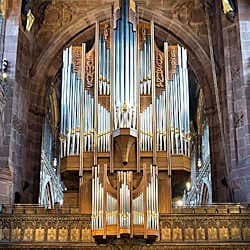 A munificent gift allowed the cathedral to commission a glorious new 4-manual organ in sumptuous cases, designed by the late Kenneth Tickell and made during 2015-17 by his team after his untimely death.

Some projects — quite a few, actually — take many years from beginning to end. The most extreme for me have been St Peter’s Collegiate Church in Wolverhampton (20 years between initial report and the completed instrument!) and Manchester Cathedral, where I first reported in 2007 and the organ was finally handed over in 2017.

Mind you, at Manchester the ground shifted completely beneath our feet when the original idea — a thorough rebuilding of the existing largely post-war Harrison & Harrison — was replaced by the concept of an entirely new organ on the screen. A two-million pound project, funded entirely by the Stoller Foundation, proved an enormous challenge from first to last. The late Kenneth Tickell designed two superb cases, one facing east in a style to match the Quire, the other with a more contemporary appearance, facing down the Nave. Obtaining the necessary permission took two years and involved several redesigns. Tragically, just as all was set to proceed, Ken Tickell suddenly and unexpectedly died. My job then was to reassure the cathedral that Tickell & Co could build the organ without Ken’s input, and then help guide the installation. This was a leap of faith by the Dean & Chapter and by the Stoller Foundation, but they took it, the organ was made, installed during 2017, ‘snagged’, and opened in a memorable recital by Thomas Trotter.

The instrument has 81 speaking stops, 5 manual departments (the bottom keyboard having a Choir organ facing east and a Positif facing west), tracker action for the attached console on the screen, electric action for the mobile terraced console in the nave, and includes the massive Pedal 32ft/16ft Open Woods and Ophicleides from the Harrison organ, along with the famous Harrison French Horn and Hill Tuba (revoiced H&H).