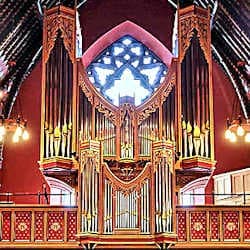 Installing an organ in a Pugin building is always a challenge, for the great architect rarely left anywhere to put it! St Mary’s Cathedral now boasts a stunning-looking Kenneth Tickell instrument made in 2012-13.

Where to put it? That was the first question that arose when I was called in by St Mary’s Catholic cathedral in 2010. The original 1869 Lewis west end organ (3/33) had been moved in 1966 by Nelson & Co to a totally buried position off the south side of the east end (now the Dean’s bedroom!) where it could be heard only through being fed through an amplifier and loudspeakers. Crazy! This was replaced in 1981 by a decent though non-sonorous classical organ by Nigel Church (2/21) sitting on the floor in the north aisle. Eventually, the need for an organ to fill the nave with sound was once again felt and I was asked for advice. The original small west gallery of stone had long gone, along with access to it, and some new stained glass was about to be gifted for the west window, but despite this, permission was eventually given for a new Kenneth Tickell organ to stand in a spacious new wooden gallery at the west end, where the cathedral choir is now also accommodated. The Church organ has found a new home in the Catholic church of St Mary & St Joseph in Poplar, East London (see National Pipe Organ Register ), where, situated in the west gallery of a resonant building, it sounds far better.

The challenge for Ken Tickell was to make the centre of the organ as low as possible in order for as much as possible of the west window to be seen from the floor of the cathedral. This he triumphantly achieved. One of my tasks in this project involved designing new style of Chimney Flute / Rohr Flöte for this organ, with Ken and his talented voicer Simon Brown. Several specimen pipes were made, and we experimented with different scales and lengths of ‘chimneys’ until we had arrived at the spectrum of harmonics (measured visibly using an iPhone ‘app’) which pleased our ears. This is used for the Swell 8ft Chimney Flute, the previous Tickell pattern being used for the Choir’s 4ft Chimney Flute.

Incidentally, following detailed measurements of the superb wooden bass pipes of the 1904 Binns Swell Open Diapason in the nave organ at Southwell Minster (formerly in Heckmondwike Upper Independent Chapel), the wooden Pedal Contra Bass pipes were made with the same sort of mouth treatment (derived by Binns from Schulze), to give the organ a 16ft Open Wood with bite and grip as well as weight. Go and hear the result!