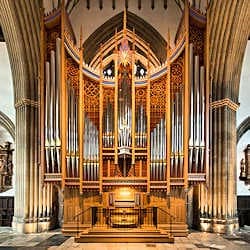 This was a rare and special opportunity: a new 3-manual organ for one of Oxford’s largest college chapels. Dobson Organs (USA) won the contract in 2011, having wowed the college with a breath-taking design for the casework.

There is a tradition at Oxford and Cambridge of lunchtime organ recitals in college chapels. Not many people attend them, but they are enjoyed by those who do, and they provide an important platform for the universities’ organ scholars to obtain concert experience in one another’s college chapels. That was how, in 1973, I came to play the 1968 J W Walker organ then at the west end of Merton College Chapel. It was a distinctly ‘Baroque-revival’ instrument, with aluminium mechanical action, to the Great of which Walkers had added a ‘Dutch Trumpet’ on a clamp slide, the previous year. It was fun to play but the instrument was clearly struggling to make any impact east of the screen, in the chapel proper. Perhaps that did not matter then, as there was virtually no choral tradition at the time. However, when the situation changed some thirty years later, and a fully-funded chapel choir was started under the joint direction of Peter Phillips and Benjamin Nicholas (later in the latter’s sole care), it soon became clear that a far more comprehensive instrument was required.

I became involved in May 2009 and wrote a paper outlining the organ history of Merton College Chapel (probably uniquely, its three former organs — including the Walker — still survive elsewhere, in various forms). I recommended the sort of organ which the needs of the chapel now suggested would be necessary; this was used as the basis of an invitations to tender. Firms from the UK, the USA and Switzerland produced detailed schemes and case designs, to assess which the college used an objective marking scheme. In the event, the tonal scheme of Dobson organs, along (in particular) with Lynn Dobson’s striking design for the casework, won them the contract, having been warmly recommended by John Scott of St Thomas’s Fifth Avenue, New York, who had contracted them to build a spectacular new organ for this most musical church.

Liaising with Dobsons over every musical, visual and technical aspect of the organ was most stimulating, and involved two stays near their workshops in Lake City, Iowa, one in 2012 and one in 2013. I was immensely impressed with the size and quality of their operation, where virtually everything is made in house, their engineering department and woodworking floor being enormous. When the first pipes were made, key Dobson staff flew with some Diapason pipes to Merton; we set them up in the Walker organ and adjusted the wind pressure accordingly, then regulated them to the volume we all agreed would be right for the building. On their return to Lake City, the Dobson voicers then voiced and regulated the rest of the organ to balance these precious pipes. Back on site, this had worked perfectly for the Great, Choir and Pedal, though owing to its elevated position and shallow depth the Swell Principal chorus was too loud. This was happily remedied and the organ came into perfect balance.

This spectacular organ has now won many admirers — not least for its glorious casework, a career high-point for Lynn Dobson, who retired early in 2020.