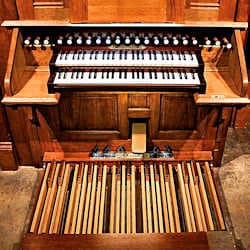 Often the smaller organs are just as interesting to restore or rebuild as the larger ones, especially if the instrument is by an ‘A-list’ maker. The Mutin / Cavaillé-Coll at Quarr Abbey on the Isle of Wight is certainly one such.

Nestled among the trees on the north coast of the Isle of Wight, not far from Ryde, and visible from the ferries, is the remarkable St Mary’s Abbey, Quarr. Founded in 1132, it was re-founded early in the 20th century when the present buildings (of brick) were erected. In 1911 the Abbey ordered a small organ from the Cavaillé-Coll firm, which since the founder’s death in 1899 had been run by Charles Mutin, who had been Aristide’s foreman. It was installed in 1912 because during 1911 they were busy making an orgue de chœur for Notre Dame cathedral, Paris — an instrument wrecked by roof falls and water on 15th April 2019, when Notre Dame’s roof burned.

The Quarr organ fared better over the years but nonetheless had been subjected to one insensitive rebuild and one inept restoration. it was therefore ripe for as historical a restoration as could be managed. The Abbot is an organist — which always helps — and it was a pleasure to help him and Adrian Mumford, who as a friend of the then organist had done some splendid research and made important decisions as to what should probably be done.

Andrew Cooper and his team undertook the work and an absolute gem of an organ has resulted, completed in 2019. Adrian and Andrew’s researches allowed us to reconstruct the console in a traditional C-C manner (with superb new reproduction C-C keyboards by P&S), to provide a new Swell Plein Jeu and remake the Swell’s 4ft harmonic flute — which, inexplicably, had been cut down into a simple open flute. The result is a pure joy and deserves to be much more widely heard and known. Fancy a holiday on the Isle of Wight?