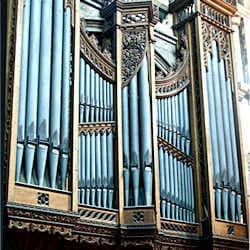 The 1909 Hill organ at Selby has a long-held reputation for being the instrument on which Fernando Germani made his iconic Franck and Reger recordings in the early 1960s. I relished the opportunity to advise on sorting it out.

At 100+ years old, with just one major rebuild in 1950, the 72-stop Selby Abbey Organ was reaching its last legs. The wind system was failing, the soundboards and swell boxes split, large reed pipes collapsing, 1950s electrics unreliable, console worn out, and so on. In addition, there had been an almost continuous stream of well-intentioned tonal alterations which had led to a most peculiar tonal scheme on the Choir and Solo (and a Pedal Mixture which was — by mistake — an octave too high!), and, sadly, the loss of some original Hill sonorities, particularly on the Solo Organ. Also, the position of the 1975 Pedal upperwork prevented it from being heard in the nave, and the Choir organ, having been shorn of its swell-box, had lost much of its original purpose.

So as part of a complete refurbishment by Geoffrey Coffin and his dedicated team at Principal Pipe Organs (since his retirement, now called York Pipe Organs), the Choir was re-enclosed, with a revised tonal scheme, the Pedal upperwork repositioned, redesigned and loudened, the Swell Mixtures sorted out, and three ‘romantic’ voices returned to the Solo Organ. The 32ft Double Open Wood, in the north nave triforium — long silent — was restored to working order, all the slider soundboards were replaced with new, using the upperboards and rackboards of the originals, the wind system was rationalised, re-made and releathered, with the large Discus blower restored by Stephen Lemming, the swell boxes were repaired and fitted with modern electric swell engines, a new Taylor transmission system was installed, the cases waxed and polished and the HNB 1950 console restored and refitted.

At the same time as all this was going on (2013-16), I was advising also at Manchester cathedral, from whom Selby was able to buy the Harrison & Harrison console to fit as a mobile console in the nave, for recital use. Dating from 1951, so almost exactly the same age as the Hill, Norman & Beard Selby console, the Manchester console had been designed by cathedral organist Norman Cocker, with curved stop jambs in emulation of the cinema organ console where he also regularly played! The convenient curved stop jambs were noticed in the H&H factory by Ralph Downes, when he was visiting on Royal Festival Hall organ business. “We must have them, too” declared Downes — which is why the RFH console was built with them. But remember — Manchester [now Selby] got there first!