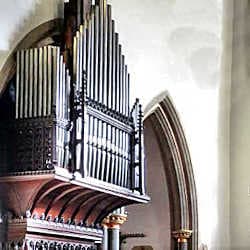 The opportunity to fully restore a 3-manual T C Lewis cathedral organ, funded entirely by the HLF, is probably unique. That was the position at St Marie’s Cathedral — but it turned out to be a significant challenge, as I shall explain.

In 1875 T C Lewis was a busy man: not only was he making an organ for St Mary’s church, Studley Royal, and for Christ the King, Skelton on Ure, he had also received a commission from one of his great patrons, the Duke of Norfolk, to provide a new 3-manual organ for a new catholic church making a highly visible presence in the very centre of Sheffield — St Marie’s. Just as at Studley, the space allowed for the organ is far too small and the site awkward. But Lewis was ingenious, and even if his maintenance staff probably pulled their hair out attempting to get around this organ in subsequent decades, he managed the job, and a powerful and brilliant-toned 23[later 24-]-stop instrument was fitted into scarcely more than the depth of one pillar, with a solid oak case by J F Bentley.

St Marie’s in due course became the Cathedral Church for the Catholic Diocese of Sheffield, and as it was nearly approaching its centenary the organ was, in 1973, overhauled by a local firm. They had to deal with a mechanical action which was deemed impossibly heavy, and with the effects of rain damage. Unfortunately they elected to replace the entire wooden mechanical action with a new one using aluminium and needle bearings. Not only did this not make the touch any lighter (weight of touch is a factor of leverages and pallet size) but it soon wore out, leaving the organ almost impossible to play. Help was at hand, for when the cathedral was redecorated to its present glorious state (correcting many of the excesses of an earlier ‘Vatican 2’ makeover), funds were made available by the Heritage Lottery Fund for the Lewis organ to be restored to its original state. The contract was awarded to Andrew Carter (Wakefield), who sub-contracted to Nicholsons the one alteration which we decided to make: to lighten the touch we needed their skill in calculating the minimum pallet sizes needed, then fitting pallet-boards and new pallets to achieve this. This work has proved a triumph, and along with the full restoration of the pipework, wind system, console and everything else has brought the instrument vividly alive.

You may like to read my Report & Recommendations [1.6mb — opens new tab] on this instrument.

I was privileged to be the consultant for this lengthy and complex project, and at the end of it to share the solo playing in the opening concert with Olivier Latry of Notre Dame, Paris. An evening which will remain long in my memory!