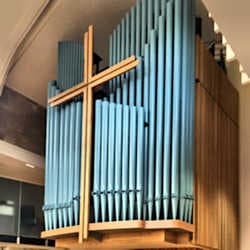 When is an organ ‘new’ and when is it a ‘rebuild’? A moot point, especially in an organ such as was installed in St Mary Magdalene, Maidenhead in 2017-18.

In the second half of the nineteenth century, British organ-builders could hardly keep up with the demand for new organs designed for the country’s churches, nearly all of which were being restored and thoroughly reordered. Architects such as Scott and Pearson were sweeping away the previous century’s ‘preaching box’ layout, with a nave dominated by a three-decker pulpit and the chancel relegated almost to irrelevance, and developing ‘Oxford Movement’ chancels, with choir stalls, an elevated Sanctuary and — sadly — an organ chamber. Only in relatively recent years has such major re-ordering begun to take place once more, usually with liturgical and musical focus of the church moving back into the nave. This has not yet had anything like as major effect on organs, most of which have remained imprisoned in their chancel chambers, sometimes with some stops added to speak into the nave. So, as a major re-ordering project involving a basically new organ in a different position is not an every-day occurrence for an organ consultant, when a project such as St Mary Magdalene in Maidenhead comes up, it is a refreshing challenge.

St Mary’s church is a typical early 1960s ‘shoe-box’ building, in which, rather unusually, the organ flanked the chancel in two shallow mini-transepts, speaking across (rather than down) the building. When a complete redesign of the church was planned, my opinion was sought over the best place for the organ. Rather cheekily I said that as it really needed to be on axis with the building (rather than speaking across it), it should be either at the west end (a glass wall, so no go!) or at the east. As the plan at the time had been to turn the congregation round by 90 degrees and place the altar (‘table’ at St Mary’s) on the north wall, the idea of placing an organ where the altar had been did not seem remotely daft. To my delight, that was the scheme the church adopted, allowing the enormous luxury of a case tall enough to contain the 16ft bass pipes of two stops. Henry Groves & Son came up with the winning scheme and internal design, to which the church architect drew the arrangement of prospect pipes (and their blue colour) with a beautiful cross suspended in front of them. In the event, the sanctuary remained at the liturgical east end, so the table / altar sits just in front of the organ, which thus acts as a giant reredos.

The budget would not run to an entirely new organ, so although the structure, soundboards, wind system, case, console (made by Renatus) etc are all new, most of the pipes are not. Indeed the organ has brought back to life almost the entire pipework (seventeen ranks) of a highly-regarded redundant 1932 Walker organ from Wyggeston Grammar School for Boys (Leicester) along with the equally fine pipework (four ranks) from the Rushworth & Dreaper extension organ of the same period (and style) formerly in St Margaret’s, Aspley, Nottingham. Some upperwork from St Mary’s has been included, revoiced.

The result is most impressive and was opened in a memorable recital by David Goode, of Eton College. The console photograph shows (L-R) Jonathan Wallace and Paul Johnson (of Henry Groves & Son), Matthew O’Donovan (Director of Music at the church, Head of Academic Music at Eton College and a former organ scholar of mine at Southwell Cathedral), the very supportive Vicar (the Revd Will Stileman), David Goode, and yours truly. To me and everyone at the church, the organ certainly counts as a new instrument. However the rules of the Institute of British Organ Building (IBO) will not accredit a company with making a new organ unless a high proportion of the pipes are also new (regardless of who made them — which in most cases is not the actual organ-builder). So despite having designed and constructed several such new organs with fine restored vintage pipework, Henry Groves & Son remain un-accredited by the IBO for the building of new organs. Something of a shame.