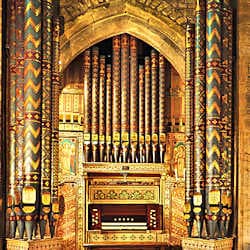 I can clearly remember first walking into this village church in Northamptonshire, turning west — then being amazed at the sight before me. This is the story of a unique organ by Thomas Casson.

Thomas Casson (1842-1910) built a series of instruments with experimental pneumatic actions of extraordinary complexity. Even his tiny model instruments (the ‘Casson Positive’ range, hundreds of which are still to be found in country churches) are over-complex in this respect, as tuners lament. One of his largest instruments, dating from around 1880, lives in a hidden corner of rural Northamptonshire, standing at the west end of Thorpe Malsor’s All Saints’ Church — and stand it does, dominated and flanked by the extraordinary sight (unique in a British parish church) of towers of 16ft metal Open Diapason pipes richly decorated from tip to toe. The decoration doesn’t stop there: every inch of the casework and remaining front pipes is decorated, culminating in panels of Pre-Raphaelite angels.

When I examined the organ as a musical instrument rather than an art object, I found it in a pitiful condition. Extreme damp had penetrated from the ill-fitting west doors behind it, and little worked. Certainly none of the pneumatic mechanisms did. A full restoration was the only route, so my report was sent to David Wood, of Wood of Huddersfield, who soon became both enchanted and wary of the instrument, in equal measure. His firm’s task was immense — endeavouring to work out how everything was supposed to function, then removing the organ, fully restoring it, re-installing and adjusting the actions so that all worked. The challenge was not only the complexity but the fact that the organ is all but impenetrable, both to reach for tuning and to access the actions for regulation.

Eventually all was got to work probably as well as it ever did, the organ gained a Historic Organ Certificate from BIOS, and this extraordinary 3/15 organ of great beauty has embarked upon another period of reliable music-making — and visual inspiration.